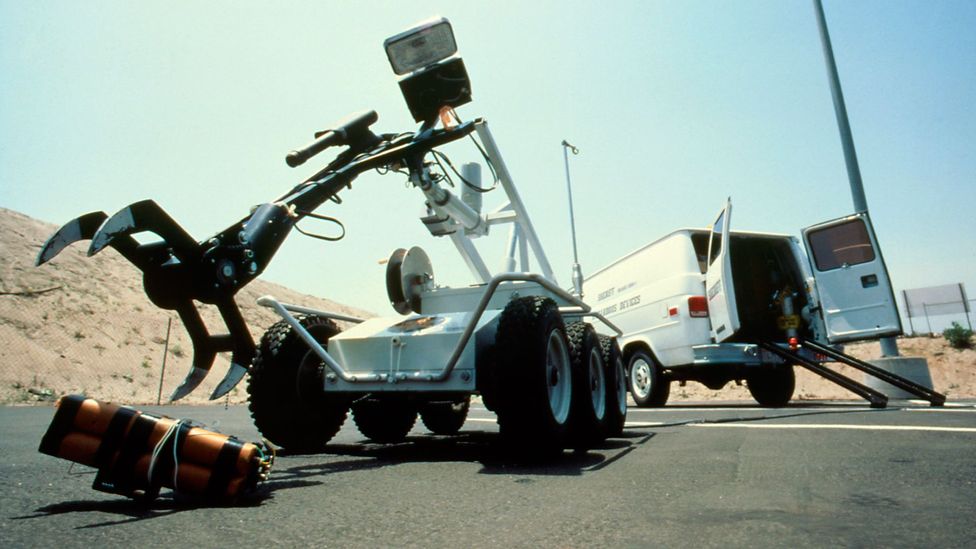 In a twist more closely resembling a Hollywood movie than reality, the San Francisco Police Department recently stood on the brink of employing bomb-toting robots authorized to deploy lethal force on members of the community. In late November 2022, the San Francisco Board of Supervisors voted 8 to 3 in favor of a such a policy.1

Unsurprisingly, SFPD’s reassurances that the robots would merely carry explosives, not guns, and be used in extreme circumstances did little to allay public outcry.

All of this came about in response to California Assembly Bill 481, which went into effect in 2022 and required all local law enforcement agencies in California to inventory their military equipment2, draft policies outlining their authorized uses, and submit the draft policies to local governing bodies for approval3. AB 481 was first introduced by Assembly member David Chiu, D-San Francisco, who introduced the bill as a way of “rebuilding community trust” with law enforcement4. “Our streets in California are not war zones, and our citizens are not enemy combatants,” he stated.5

Ironically, what was meant as a means of increasing transparency and mending relations between the public and police prompted SFPD-with little public input-to seek and briefly gain authorization for the use of deadly robots. SFPD currently has twelve remote-controlled robots which are typically used to survey difficult-to-reach areas or defuse bombs.6 SFPD’s original draft policy was silent with respect to the robots’ authorized uses. In response to that omission, Board of Supervisors member Aaron Peskin, wrote into the draft policy a prohibition against the robots using force.7

However, SFPD responded with its own redline-crossing out Peskin’s addition and including authorization to use the robots “as a deadly force option when risk of loss of life to members of the public or officers are imminent and outweigh any other force option available to the SFPD.”8 It was this iteration of the policy that surprisingly garnered a majority of votes in late November.

Public backlash was swift. Critics such as Dean Preston, who is on the Board of Supervisors and voted against the policy, stated that SFPD failed to publish the policy publicly at least 30 days prior to the vote, violating California Government Code section 7071(b).9 Other civil rights groups, including the ACLU, banded together with members of the public in opposition.10 In total, forty-four community groups signed a letter opposing the policy, which stated in part: “Using robots that are designed to disarm bombs to instead deliver them is a perfect example of this pattern of escalation, and of the militarization of the police force that concerns so many across the city.”11 On December 5, 2022, groves of protesters showed up outside of City Hall with signs proclaiming their opposition, such as “We’ve all seen that movie …No Killer Robots.” 12

Within days, the Board of Supervisors voted to amend the policy to prohibit lethal use of the robots.13 As amended, the policy passed unanimously.14 However, the board sent the robot provision to a committee for further consideration. 15

Debate about how technology should be used in policing is not new. Ryan Calo, a professor at the University of Washington, “has long been concerned about the increasing militarization of police forces.”16 He notes that use of robots could protect both officers and suspected violent individuals. Using robots would allow officers to remain far from danger as well as negate the reason cops use force-i.e., perceived threat to officer safety.17 But, “We have to ask ourselves do we want to be in a society where police kill people with robots? It feels so deeply dehumanizing and militaristic.” 18

The debate also raises questions about legal liability and the potential for civil rights wrongful-death lawsuits. What happens if technology malfunctions and injures or kills someone? “It becomes very difficult to disentangle who is responsible. Is it the people using the technology? Is it the people that design the technology?” wonders Calo.19 And how will the courts interpret qualified immunity in the context of human-controlled robots in a civil rights claim?20 How would “a reasonable officer” use lethal robots? What becomes of the “clearly established” legal standard where there’s no precedent for the use of such technology? Hopefully, we never have to find out.

2 As an aside, if you’re wondering how it is that local law enforcement agencies-including those serving K-12 schools-have military arsenals, the ACLU helpfully explains both how that is and why it is so problematic. Charlotte Lawrence and Cyrus J. O’Brien, PhD, Federal Militarization of Law Enforcement Must End, ACLU, May 12, 2021, https://www.aclu.org/news/criminal-law-reform/federal-militarization-of-law-enforcement-must-end.