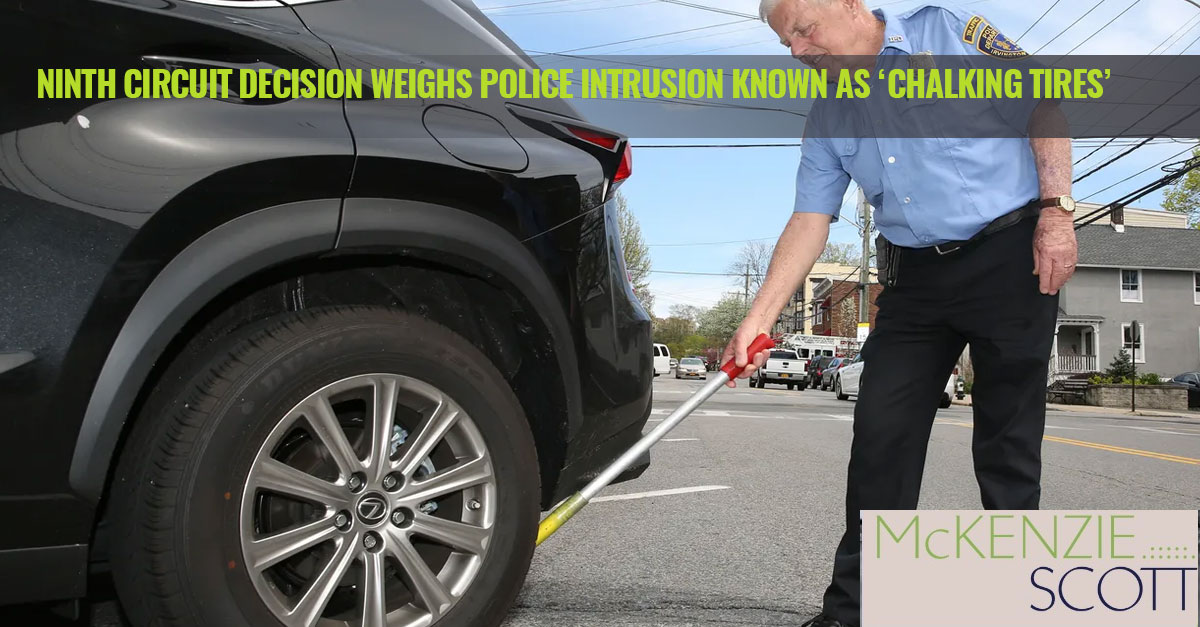 Last month the Ninth Circuit published a decision on the constitutional implications of what may be perceived by some as a small, annoying police intrusion – chalking the tires of parked cars. The Ninth Circuit’s holding in Verdun creates a Circuit Split over the issue and includes some choice words from the dissenting judge. Verdun v. City of San Diego, 51 F.4th 1033, 2022 WL 14725258 (9th Cir. 2022). Before long, as wild as it seems, the Supreme Court may have to weigh in on whether the “benign practice of lightly dusting chalk on the tire of a car parked in a city space” is prohibited by the Fourth Amendment. Id. at *11.

Here, we provide a bit of background on the issue, why the judges of the Ninth Circuit disagree, and a bit of opinion on what this disagreement indicates about the administrative search doctrine.

This case was brought by two people in San Diego who received tickets for overstaying their welcome in a public parking space and where the investigation consisted of tire chalk. Those two people brought the case on behalf of a putative class of similarly situated, inconvenienced drivers. At the summary judgment stage, the district court accepted a slew of evidence on the traffic-problems created by people circling the block in search of parking and the resource-intensive administrative challenge of enforcing parking laws.

The district court ultimately concluded that chalking tires is a “search” within the meaning of the Fourth Amendment because of the Supreme Court’s trespass to property theory of the Fourth Amendment (developed in United States v. Jones, 565 U.S. 400 (2012) (where placing a GPS device on a car was a search because of the physical trespass on the car)). Generally, a search must be supported by a warrant (not present here) or justified by some level of suspicion (also absent) but the district court granted summary judgment to the municipal defendant under an exception to the warrant requirement for “administrative” searches.

On appeal, most of the 9th Circuit panel affirmed the district court’s conclusion.
Before diving into the exception for administrative searches, the Ninth Circuit “assumed” that chalking tires was a search because of the posture of the case and thereby avoided officially deciding whether it was a search. Next, the court went on the examine cases involving the administrative search doctrine, two of which tee up the key distinction upon which the court relied here: Michigan Dep’t of State Police v. Sitz, 496 U.S. 444 (1990) (upholding a DUI checkpoint searching for drunk drivers) and Indianapolis v. Edmond, 531 U.S. 32, 44 (2000) (striking down a dog-sniff checkpoint searching for drugs). The court explained:

warrantless checkpoints have been found not to have general law enforcement as their primary purpose when there is a ‘close connection between the checkpoint and the harm it was seeking to prevent.’ [. . .] Sitz upheld automobile checkpoints to look for intoxicated drivers, but then Edmond struck down virtually identical checkpoints to look for drugs. Edmond explained that the DUI checkpoints at issue in Sitz served a permissible purpose because of the ‘obvious connection between the imperative of highway safety and the law enforcement practice at issue.’ By contrast, the concealment of drugs had no close ‘connection to the roadway,’ so the drug checkpoint at issue in Edmond served only a ‘general interest in crime control.’

Verdun, 2022 WL 14725258, at *8.
From those cases, the Ninth Circuit held that chalking tires is an administrative search because “there is a close connection between the chalking of tires and the harm it seeks to prevent [ . . . .] And because San Diego requires parking officers to chalk all cars in a given area, San Diego has avoided the ‘kind of standardless and unconstrained discretion’ that has presented constitutional problems in other cases by raising the specter of a generalized law enforcement purpose.” Id.

In his dissent, Judge Bumatay makes an argument that the original meaning of the Fourth Amendment would not have countenanced tire-chalking. He also argues that this search does not fall within the administrative search exception to the warrant requirement because that exception is limited to “uniquely urgent and exceptional cases.” Id. at *19 (J. Bumatay, dissenting). In those cases, Bumatay argues, the need for suspicion-less searches was “great,” there was “immediate danger,” a “grave” concern, and it was simply “necessary.” But, “neither the Supreme Court nor our court has ever approved of an administrative search for such pedestrian concerns” as tire chalking or parking. Id. at *20.

What Does It Mean

At bottom, the analytic difference between the majority and the dissent is reasonably well captured by each respective side. According to the majority “[m]uch of the dissenting opinion appears grounded in the belief that the entire administrative search doctrine is an affront to the original meaning of the Fourth Amendment.” Id. at *11. According to the dissent, “we risk swallowing the protections of the Fourth Amendment within its exception.” Id. at *18.

For example, the Court describes the critical distinction here as between “ensuring ‘[roadway] safety'” (wherein it is okay to search cars without suspicion) and “general crime control” (wherein such searches are unconstitutional). Id. at *4. But the distinction between these two principles is uncertain at best. The drug search checkpoint in Edmond might have survived this level of barely-scrutiny if the city there had more effectively claimed to be looking for drug trafficking on the roadways or drivers under the influence of drugs.

Meanwhile an analogous quasi-legal dispute is firmly established in the circuit courts of appeal. The Ninth Circuit imagines a parade of horrible results if the city is not allowed to chalk tires: “emergency vehicles [unable] to navigate city streets,” blocked fire hydrants, and “greater safety risks to pedestrians, bicyclists, and drivers” as a result of “drivers searching for spots [who] are also distracted.” Verdun at *2. But last year the Sixth Circuit bluntly held that “municipal parking plainly does not ‘pose[ ] a clear and significant risk to the public welfare.'” Taylor v. City of Saginaw, Michigan, 11 F.4th 483, 488 (6th Cir. 2021). As a result, we may soon see the Supreme Court weighing the constitutional implications of chalk that “rubs off within a few tire rotations.” Verdun at *2.